This website uses own and third-party cookies to compile statistical information on your browsing habits, so that your experience will be enhanced and personalised, providing you with contents in which you are interested. If you continue browsing this site, we shall consider that you have accepted their installation and use. You can change your settings and obtain further information at Cookies Policy

Do not show this message again

Fundación Bancaria Caixa d’Estalvis i Pensions de Barcelona, “la Caixa”, is the result of transforming “la Caixa” into a banking foundation in June 2014, in compliance with the Savings Banks and Banking Foundations Law of 27 December 2013.

La Caja de Pensiones para la Vejez y de Ahorros de Cataluña y Baleares, ”la Caixa”, was founded on April 5, 1904 by the Catalan lawyer Francesc Moragas Barret with the support of various Catalan civil institutions. It was created with the aim of encouraging savings and retirement planning, objectives which today might appear to be merely financial but were, in that historical context, clearly intended to help the working poor to achieve a measure of financial independence and security.

On April 16, 1904, King Alfonso XIII officially inaugurated the Caja de Pensiones para la Vejez at the Beaux Arts Palace in Barcelona, the setting for many of the city's most solemn events. At the inauguration, the monarch was named Honorary President and protector of the new entity.

Moragas, the first managing director of ”la Caixa”, had an idea: to create a private institution which, in those socially turbulent times, could offer workers and business leaders an instrument to provide retirement and disability insurance. At about the same time Moragas and his associates included savings instruments as well. Thus was born ”la Caixa”, an entity with a new economic and social concept of savings and the first to provide social insurance.

Headquarters of ”la Caixa” in Via Laietana of Barcelona in the 30s.

Francesc Moragas promoted an ambitious, professional concept of management which was very different from the predominant model in other savings banks at the time. He offered diversified savings products and created branches in Catalonia's main towns and cities, introducing modern financial management. The territorial expansion of ”la Caixa” continued apace in Catalonia and the Balearic islands with the aim of spreading the advantages of modern finance. In this sense, it should be noted that ”la Caixa” was a Spanish pioneer in social assistance, one of the basic pillars of the current social security system.

”la Caixa”, whose social goal of ending social exclusion was linked with the socioeconomic development of its territory, soon explored new methods of social action. It was also show its innovative character by changing the concept of social work in savings banks.

Until then, ”la Caixa” and the other savings banks dedicated all earnings to reserves, limiting social spending to awarding prizes to depositors and to making small donations to charitable and cultural institutions. Starting in 1917, ”la Caixa” began to allocate part of its earnings to social projects and, in 1918, decided to integrate Welfare Projects into its organization to ensure that they would be managed efficiently and professionally. Rather than providing charity, the idea was to provide a range of social assistance, cultural, and civic services that would improve people's quality of life. Over the years, these innovations were recognized in Spanish legislation.

History of a symbol

At the end of the 70s ”la Caixa” decided to create an original new corporate identity to set it apart from other Spanish financial institutions. The idea was to endow ”la Caixa” with a unique personality, both easily identifiable and easy to identify with. The Landor Associates company was hired to tackle the task. Of all the proposals on the table, the most appropriate and innovative was selected. Joan Miró, the most universal Catalan artist, was commissioned to create a tapestry from which an emblem could be taken.

Thus, in 1980 the star and its colour - so Mediterranean and typical of Miró's work - became the institution's symbol. Since that time, the symbol of  ”la Caixa” has set a trend in the area of corporate image in the Spanish financial sector. Its widespread presence both in the streets and in the media has made the ”la Caixa” star familiar throughout the country.

- The product of a plan to expand outside of Catalonia and the Balearic Islands, “la Caixa” formed the largest network of branch offices in the Spanish financial system, and it funds and maintains activities of a social, cultural, educational and scientific nature through Obra Social.

- In 2007, “la Caixa” approved the initial public offering of its investee portfolio through the Criteria Caixacorp society, of which “la Caixa” will keep a controlling share.

- In 2011, ”la Caixa” approved a reorganization process which peaks with the creation of CaixaBank, a quoted banking organization through which the “la Caixa” Group continued to indirectly develop its financial activity.

- CaixaBank brings together the banking business of ”la Caixa”, the insurance business and its in international banks, and Repsol. The bank holds a leading position in the Spanish financial and insurance sector, and is also engaged in other complementary activities. It has some 5,700 branches, the lowest ratio of non-performing loans among the large Spanish financial groups, the best coverage and the best capital.

- ”la Caixa” is also creating a new entity, which brings together the industrial holdings of the former Criteria CaixaCorp (Abertis, Agbar, Gas Natural Fenosa, Port Aventura and Mediterránea), Servihabitat and the property businesses. 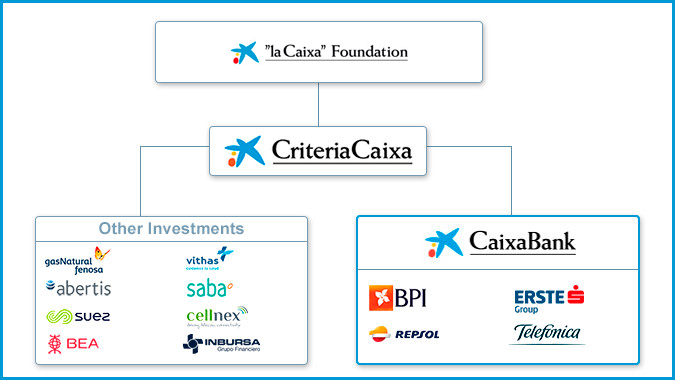 The “la Caixa” Foundation is, more than 115 years after its establishment, the first foundation in Spain, the second in Europe and one of the most important in the world by volume of social investment.

CriteriaCaixa is the holding company that manages the business assets of the "la Caixa" Foundation, with a dual objective:

1. To generate the resources necessary to finance social projects.
2. To preserve and grow the foundation's assets.